This is a rambling post full of random thoughts. I know you’re used to that over here and probably I don’t even need to mention it, but whatever.

I have somehow ended up with an iPhone. I’d say I’m not sure how that happened, but I know exactly how it happened.

Several months ago, my daughter decided we were paying too much for cell phone service (she and her husband are on my plan). So I told her, fine, you find a good plan that’s less expensive and we’ll switch. Because I hate dealing with that kind of stuff.

Of course, being an intrepid adventurer who did not inherit my gene for procrastination, she did just that. Only problem was, my very old cell phone was so old that it sent the new plan into paroxysms of laughter before it said, “No. You need a new phone. One from this century.”

Here’s a picture of my old phone (on the left, if you couldn’t tell), next to the new one. With bonus coasters, because I’m too lazy to crop them out. 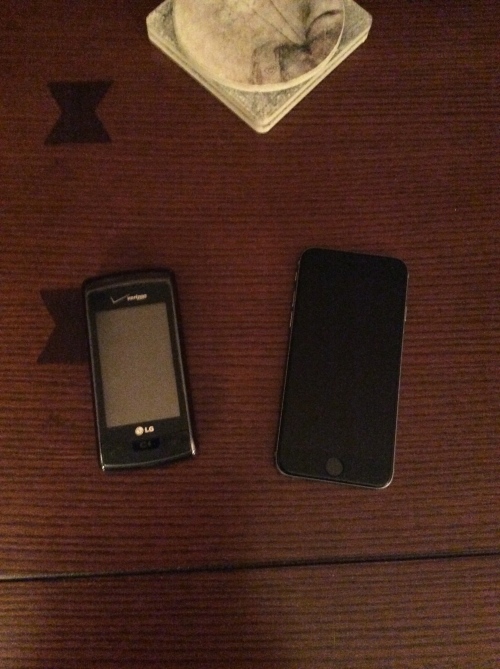 Oh, stop laughing. The old one was functional. I was able to check the time and date and send text messages and even set an alarm. I’m pretty sure I could make phone calls with it. Probably. It’s not like I have first-hand knowledge of that.

Sigh. I guess all good things come to an end.

I looked at the options for new non-smart phones (I wasn’t impressed) and decided I might as well accept the inevitable sooner rather than . . . even later. I resigned myself to the fact that I’d have to get a phone that could launch missiles and connect with the ISS and negotiate world peace through predictive text.

Now, I’m not a complete Luddite, but the adaptation has been predictably hilarious. And pitiful. Here’s an example of a typical text conversation with my daughter (we had been talking about the pic she sent of her Christmas tree):

And then there is this inexplicably recurring nonsense from Siri, which I have transcribed from memory:

Me: . . . [silent, wondering whether there’s a way to opt out of being spoken to like a three-year-old]

Siri: I’m not sure what you said.

Me: That’s because I’m speechless.

Siri: I’m not sure I understand. Did you say, “How do I write a speech?”

Me: Not even close.

Or I’d hit some weird combination of buttons and get this:

Siri: How can I help you?

Me: Sorry, didn’t mean to summon you.

Siri: You do not need to apologize to me.

Me: I’m going to disconnect you now.

I decided Siri might be less irritating as a male, so I changed the voice preference the other day and haven’t heard from her, er, him since.

But I did discover — completely by accident, due to my tendency to click on stuff despite not knowing what it does — that I can text from my laptop. This is so cool, I can hardly believe it. Totally awesome to type a text message on a full keyboard rather than a tiny phone screen. This thing is really more computer than phone.

Another plus, the camera is light years better than the one on my old phone. Here’s a pic of The White Ninja, which is what my son calls her [it has been pointed out that I can’t really call her The Intruder Cat anymore, since the cat-intruded-upon is no longer with us]. See how she’s being all cooperative and shedding on a white blanket? That’s only because I moved my black sweater. 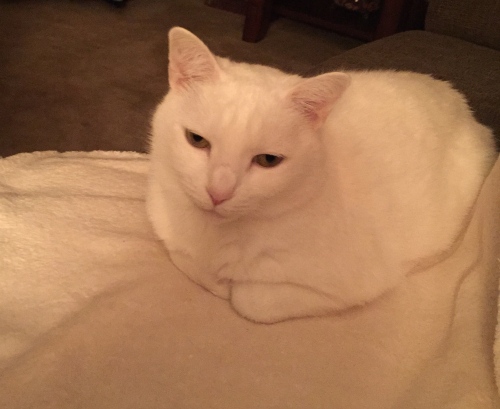 As you might suspect, I’ve been feeling sad the last several weeks, missing my ancient kitty. She might have been ornery, but she was mine. There was a significant amount of time both before and after she died during which I didn’t write. At all. But I’ve been trying to get back to it in the past few days. Not easy, with the distractions of the holidays.

Speaking of distractions, my son just sent me this text message:

I laughed SO HARD. That child definitely inherited his mother’s irreverent sense of humour. [I’m sorry if you don’t get the reference, and really sorry if no one forces you to watch that South Park episode every year at Christmas time, but I am not going to be the one to explain it.]

I’ve heard quite a few writers say they don’t like to talk about what they’re writing while writing it. As if doing so saps the words of their energy, deflating the story and rendering it lifeless. I’ve discovered over the years that I fall squarely into this camp.

I will say that an interesting thing has happened with my writing in the past several months. “Interesting” being open to interpretation, I guess. I’ve been actively writing two stories at the same time. While making notes on a third. And there’s a fourth one, a short story, that is completely developed in my mind.

I’ve never attempted this before. I’m sure it’s a Very Bad Idea. There is no “right” way to write, but if there’s an inadvisable way or a convoluted way or a way that is more difficult, you can bet that’s what I’ll manage to do.

Is this procrastination? I don’t know. Maybe. I’d be worried if I completely stopped writing one story in favour of another. That’s a big red flag. But this is different, this switching back and forth and writing two at once. Yes, it means the entire process is taking a bit longer, but I’m not sure I could write these two stories any other way. They’re both proving to be . . . difficult. In different ways. It helps to alternate, for one to lay fallow while the other percolates words, and then back again.

The interesting thing, to me, is the discovery that writing straight romance has helped me see that thriller manuscript I set aside more clearly. I don’t mean “straight” as a sexual definition. Is “pure” romance a better term? No, that has other connotations as well. I mean straight-up romance without a thriller plot or a conspiracy woven though it.

One thing that bothered me about that story was that the tone was uneven. Most of it sounded like a thriller, but large sections of it sounded more like a romance. This is not a good thing. But, somehow, writing romance has made it easier for me to really “feel” the genre differences between romance and thrillers. Mind you, I’m an avid reader of both genres. I understand the differences. I just couldn’t always manage to separate them in my writing. And even though I want to write both, I had come to believe I’d never have what it takes to do justice to a thriller. So it’s encouraging that I’ve been thinking about that thriller again in stray moments. Getting excited about it again. That story will require intense and exclusive focus, when it’s time, but that time might come sooner than I anticipated. We’ll see what transpires.

Anyway, due to this weird new process, it might happen that I finish several stories at the roughly same time. But who knows. I’ve learned to stop making predictions. Life has a way of thwarting even the simplest plans and there was plenty of that this year.

I’ve decided to announce new releases first via my newsletter, well ahead of mentioning them here on my blog or elsewhere. So if you want to be among the first to hear about the publication of new stories, at a discounted price, go sign up for my newsletter (here’s a link, or see the sidebar). I won’t share your email address and you can unsubscribe at any time. No pressure. You do whatever you feel comfortable doing.

Good grief, I’ve rambled on longer than even I thought I would. I do want to mention that I’m going to take an extended break from the internet after Christmas, in spite of this new iThing that insists on connecting me every time I move. I have at least two stories at the point where they need my complete focus. And another one, perhaps two, that are impatient to burst forth onto the page. Seems like a good idea to mute the distractions for a while.

I hope you all have a wonderful Christmas, if that’s something you celebrate. Regardless of holiday preferences, I wish everyone peace and calm and clarity as one calendar year draws to a close and a new one begins.

I hope you are able to take a few days off from the ordinary and make them extraordinary. I hope you manage to share space with people you love, or at least find tolerable the ones you’re stuck with. And I hope you make time to read.

As for me, I’ll be wishing for an encore of this: