How did it get to be the end of March, already? Yes, of course, in the usual way, days passing one after the other without pause. Perhaps the better question is why haven’t I accomplished as much as I had planned to by now. I am making progress, but it’s been slow.

Speaking of time passing (and in an effort to post something less “controversial”), on my latest birthday (in December) my Bossy Older Sister sent me flowers. Red orchids, to be exact:

I’d never seen red orchids before. Aren’t they gorgeous and exotic? The enclosed note said something about the flowers helping me celebrate all year long. Which confused me, because these were cut flowers and I didn’t see how I was going to keep them alive for an entire year. I asked her about it and she said, “No, silly. You’ll get new flowers every month, for a year.”

WOW. What a wonderful gift. I love flowers, absolutely love them, but never buy them for myself. It just seems . . . overly self-indulgent.

So the red orchids lasted almost three weeks, but then they were gone and I’d pretty much forgotten about the “every month” thing when one day in January, these showed up: 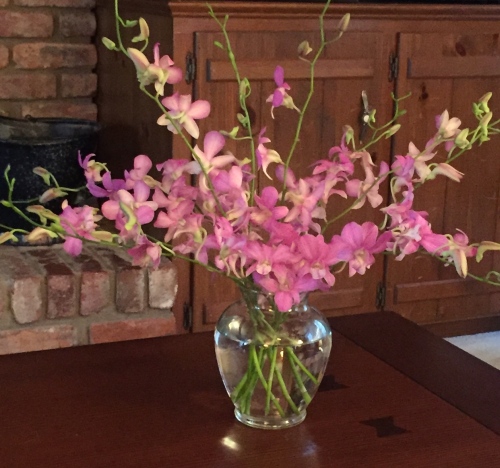 MORE ORCHIDS. I thought the red orchids were just a lucky selection for one month, but no, turns out it will be an entire year of ORCHIDS.

These were delivered in February (sorry, by the time I realized it was a horrible blurry pic, it was too late):

And just last week, these arrived:

You can’t tell from that pic, but the centers of these look like Johnny Jump-ups, so it’s like getting two flowers in one. Wait, here’s a close-up:

So this has been delightful, getting fresh flowers every month. Luckily, The White Ninja is indifferent to the additional coffee table décor and hasn’t eaten any of them. Yet.

What other innocuous things have been going on . . .

Oh, my daughter and her husband took a two-week vacation in Europe. I freaked out just a wee bit after their plane took off and I realized they were going to be 30-some-thousand feet over the vast, deep, unsearchable expanse of the Atlantic for several hours. Which was unsettling because I hadn’t anticipated being bothered by that. But I was, on both their departure and return.

They’re back now [whew] and my daughter has been sending pictures, most of them the usual touristy sort of thing: here I am next to some ancient stone structure, here we are drinking beer, here’s a lovely landscape. Great shots, but you know the kind of thing I mean.

But this one is different and it really caught my attention. And my imagination:

She titled it: Rainy Cityscape

I love that it’s not the usual tourist picture. I love the shine of wet cobblestones at night, the juxtaposition of the modern bicycles and the centuries old Bächle. But mostly I love the mysterious, almost spooky, atmosphere it invokes.

Makes me want to tell a story.

Yeah, maybe I’d better finish the ones I’m already working on first. Before another month comes and goes.