I’ve been trying to learn Spanish via the DuoLingo (DL) app. I began sometime last July, on a whim and as a distraction and because several friends were doing the same with various languages. To date I have an uninterrupted string of 231 days. This is particularly impressive (to me) as I never do anything every single day, apart from the mundane, nor do I aspire to. But I enjoy the challenge of learning, in spite of being far from achieving anything resembling fluency. So I persist.

DL will often require us, among other tasks, to translate sentences from English to Spanish, and vice versa.

The other day, the sentence was:

“Cuándo ves a tu madre otra vez?” [When do you see your mother again?]

It made me cry.

I relayed this information to my sisters via text, including the fact that I got all teary-eyed. It did not help matters at all when my older sister, who has been learning Spanish via DL far longer than I, replied in that language:

“Solo en fotos, solo en sueños.” [Only in photos, only in dreams.]

I know from experience that grief hits me hardest when it’s new or, years later, in moments when my guard is down and I’m not expecting it.

It has barely been three weeks. The loss is still fresh and tender and raw, my hastily constructed shields inadequate to the task. And I certainly was not expecting inadvertent evocation from a language-learning app.

But grief doesn’t care about your readiness or your expectations or your “this was inevitable and in many ways it’s a blessing” platitudes.

Grief strips you bare. Down to the breathless pain of stark white bone.

“Only in photos, only in dreams.”

No, that’s not accurate– I sobbed and keened and scared the cat.

And for the first time in three weeks — or in five years, or in what seems like an eternity since that cruel diagnosis — I felt myself begin to truly grieve, to attempt to measure and reconcile the depth and weight of this new void I now carry.

It will become familiar, soon enough. No translation needed.

Tagged as death of a parent, loss and grief

When you least expect it

Today is the 20th anniversary of my dad’s death and I’m surprised to find myself feeling all nostalgic and melancholy. You’d think, after so much time has passed, that feelings of loss and grief would have faded. And, of course, they have. But there are still times — odd times, not necessarily the times you expect — when it all comes flooding back, as fresh and raw as if 20 years were just a blink.

Today is one of those times.

Here’s an old picture of my dad and mom (holding my son, who is now an adult) and me, squinting in the bright Arizona sunshine. Dad looks shorter by comparison than he should (I’m 5’8″ and he was 6′), as he’s standing in the grass and we’re on the sidewalk. Dad hated having his picture taken almost as much as I do and it was a rare event that someone managed to capture both of us at the same time (photo credit: my bossy older sister). 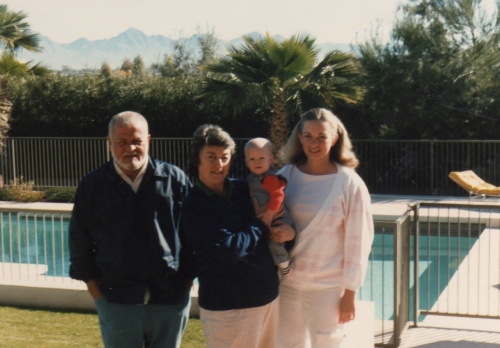 So many memories and such excessive eye moisture I’m having today. My very stoic father would be rolling his eyes at me with an expression of affectionate but pained tolerance on his face. So would my mom and sisters, for that matter, if they ever read this. I’m telling you, it’s not easy being the sappy emotional one in a family of Scandinavians. Whatever. Might as well just wallow for a bit and get it over with.

I guess it doesn’t help that earlier in the week I asked my older sister to send me a copy of the eulogy the two of us wrote, and delivered at his memorial service, because I couldn’t find mine. Twelve typed pages of memories, so many things I’d forgotten saying. I had thought I might share some of it here, but it’s too personal. Too evocative. Too much an invasion of private grief.

But the day feels like it needs some sort of tribute, so I decided to share something else instead. My dad knew a lot of people. Quite a few of them were involved in politics, as political and civil rights issues were a passion of my dad’s. He never ran for office, preferring to remain behind the scenes in the role of teacher and advisor.

One of the people he knew was Pete Stark, a US Representative from California. We discovered, quite some time after dad died, that Mr. Stark made memorial remarks during session that became part of the Congressional Record. I’ve decided to share those remarks below, redacting dad’s name and some details– not in an attempt to protect his privacy, but mine.

As friends and family reflect on his lifetime of achievement and scholarship, it is only fitting that we also pay tribute to this great man and good friend.

Quite a tribute to the legacy he left. Dad would have been touched and deeply honoured. But it’s just a small sampling of who my dad was, publicly, the things other people knew and admired him for. And why the world was a richer place for him having been in it. He was by far the most intelligent person I’ve ever known and among a handful of the wisest.

I can’t even begin to find words for what he meant to me personally and why there will always be days, like today, when the void he left seems immeasurable. Other than the obvious ones: I miss you, Dad.

Tagged as death of a parent, longreads, loss and grief, mourning, Pete Stark, tribute to those lost