On gifts and giving

My sisters and I have pretty much stopped sending each other gifts for birthdays and Christmas. There have been some notable exceptions, but this has been the mutual agreement for many years. So when my youngest sister mentioned she’d sent me something for my birthday, which was a week or so ago, I assumed she meant a card.

I was surprised when I received a package that was somewhat larger than a card, and far heavier and thicker. Of course, there was a birthday card enclosed. It was funny and made me laugh. Here’s a picture of it [from baldguygreetings.com] which is not good quality because I’m propping this stuff up on my laptop screen: 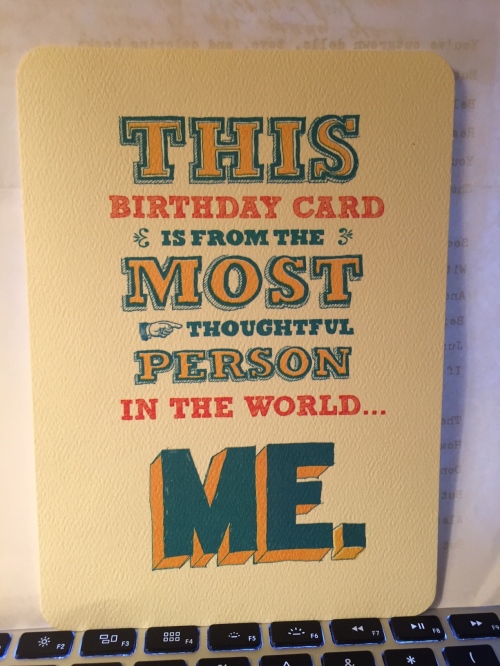 If you can’t see it, that last item says:

“THEY HAND WRITE YOU A LETTER ON COLLEGE RULED BINDER PAPER:
This would be the most caring person in the world — if you were in the 4th grade. But since you’re not, this is weird and to be honest, a little creepy. This person has the potential to be a stalker. Be careful. Seriously.”

So it totally cracked me up when she did indeed enclose a hand written letter on college ruled binder paper, written as if she were in 4th grade (yes, I deleted my [real] name).

She also sent photocopies of two different things I had written and sent to her, although not when I was in 4th grade (which might have been a plausible excuse).

One of them was a photocopy of a letter I’d written (in cursive, no less, demonstrating I was once capable of legible penmanship) when I was living in Atlanta and she had just moved, or was about to move, to Chicago. I referenced sending two “silly gifts” but don’t say what they were. I don’t remember writing it and neither of us can remember what I sent. It’s pretty sappy. You don’t need to see that.

The other paper is a copy of a poem I apparently wrote for her when she turned 13 and I was a month shy of being 17. It’s too ridiculous not to share:

Can you read it? Probably just as well if you can’t. I have no memory of writing this either, although I do remember that I used to write “poetry” [ahem] ALL THE TIME when I was younger. Some of it I put in writing, but most of it was just in my head, usually composed while in the shower (I was hell on my parents’ water bills). But there you have it, proof that I’ve always been more than just a little weird. It must have been pure torment to have me as an older sister. Or a younger sister. Or daughter, for that matter.

And then I got to the gift-wrapped item in the package, which turned out to be a book. It made me cry.

It’s an old book, slightly water damaged and musty smelling and perhaps even a bit moldy around the edges. A book my sister “rescued” from the basement library in our parents’ house several years after the epic flooding back in . . . whenever it was. Mid-80s? It’s one of the books deemed to be “not too badly damaged,” therefore escaping the heartbreaking dumpster fate of so many other tomes. This book:

You might think this is a really weird gift. I mean, it’s pretty much just an ordinary school textbook. You might wonder why seeing it made me cry and why I will always treasure it. Here’s why: 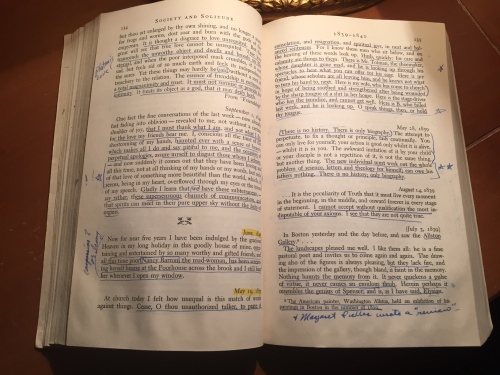 This is one of my dad’s books. My dad the high school English teacher/debate coach who died way too young almost 20 years ago. That’s his distinctive writing in the margins, his characteristic underlining of words and phrases. That’s the look of every student paper he graded for his own classes over the years, every book he read, every thought-provoking article in some publication or other. It’s the look of every single paper I ever wrote, after it had been turned in to and graded by some other teacher and then grudgingly, at his insistence, handed over to him for the red (or blue) pen treatment.

And damn, I’ve missed seeing that. Of all the hundreds of books in my house, this is the only one (now) in my possession that was his. It’s an amazing gift, one I never would have thought to ask for. A gift I didn’t even know I wanted. My sister knew. It holds the same value and memories for her, after all, and I was moved by her thoughtful generosity in parting with it.

Since this is a traditional time for giving, and not solely because of MY birthday, it seems to be a good time to say I hope the gifts you receive — and the ones you give — this holiday season will be similarly meaningful and worth treasuring.

And apart from material things, or perhaps more accurately, in addition to tangible forms of generosity . . . in the coming year, I hope more of us will give the gift of attention and understanding and compassion to those who suffer and struggle. I hope more of us will grant that precious gift not only to those we know and love, but especially to those we don’t, who live in nearby and far off places we’ve never seen, whose hardships we might recognize or will never know, whose humanity is exactly like our own.

If I could give each of you a gift to share, it would be that.