What’s in a name, anyway?

In December, when everyone was here for my birthday, my son-in-law suddenly asked, in a teasing way, “So, how old are you now?”

I had to pause and think about it, as I always do. Part of this inability to remember my age is that my birthday is at the end of the year and it’s not a simple matter of subtracting one year from another, because 11.5 months out of 12 that answer would be wrong. The bigger part of it is that my age doesn’t really matter to me and never has. The entire year I was 39, I told several people I was 40. Only to realize, the next year, that I was . . . 40 again.

Anyway, he laughed at my hesitation and said, “You know, when we [doctors] evaluate people for memory issues, there are two indicators that people are in real trouble– when they can’t remember their age or their name.”

I protested that I did NOT have memory issues. [Note: Quietly deciding not to do something people think you should do and have repeatedly told you to do doesn’t mean you’ve “forgotten” it.] [Yes, I have always been willful.]

He relented and said it wasn’t exact age so much as not being able to remember their birthdate. I’ve never had any problem remembering that, thankyouverymuch.

What I didn’t tell him is that when it comes to my name, I might be in trouble.

There just aren’t very many people who call me by my “real” name, anymore (this is not a complaint). My kids call me Mom. My mom and sisters and a few close friends call me an abbreviated version of my name. My long-time online friends refer to me by the initials BCB, and everyone else knows me by my pseudonym. Honestly, I have to concentrate sometimes to remember which name to use when I’m making an appointment to have my hair cut or my furnace serviced.

Do I need to create some quasi-official ID to reflect all these different names, so when the surely inevitable day comes that someone questions my mental acuity there will be a comprehensive record?

“I know what the chart says, doc, but I’m not confused. Really. I estimate that 80% of the people I know actually do call me KD James.”

Speaking of names, several years ago the standard advice for writers was to create a google search for your name (or your pseudonym). Not sure why everyone thought this was necessary — I don’t really care whether someone online is talking about me — but I did it anyway.

It’s rare that I get a notification. When I do, it’s usually just telling me that I’ve published a new blog post. Or, more likely, it’s to tell me that Kevin “KD” Durant and LeBron James are in the news at the same time. Makes me wonder whether they get notifications when I put up a new blog post.

Several months ago, I got a different kind of notice. Someone had created two new characters for a board game called Dead of Winter: one was named Meryl Wolfe and the other was, ta da, KD James. I was busy and ignored it, but I got another alert a couple weeks ago when someone was selling their game upgrade.

And I started to wonder . . . is this just a weird coincidence or did someone actually name this character after me? 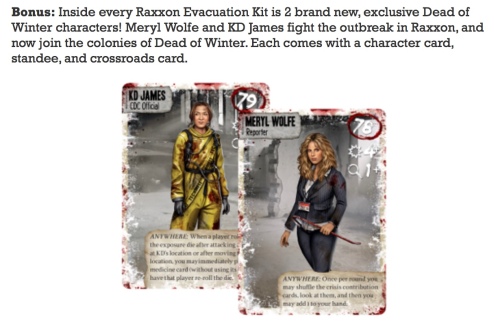 She looks just like me, right down to the blood-stained jumpsuit I usually wear around the house. Positively uncanny.

It’s hard to read, but apparently the game is about an apocalyptic zombie virus and this character is a “CDC Official.” But I can’t tell what sort of role she plays. Is she a good guy who finds a cure for the virus? Oooh, or maybe she’s a bad guy who spreads the virus? I hope she’s not merely a hapless bystander who dies inelegantly. Or do the players get to change the role each time?

I’m not a gamer — my kids tried to teach me to play Werewolf and it didn’t go well, given I couldn’t stop laughing at the narrator’s oh-so-dramatic voice (honestly, it’s a fun game, you should try it) — so I’m not entirely sure how that works and whether roles even can change.

Now, I don’t think I know any game developers but I guess it’s possible one has heard of me? KD James isn’t a particularly common name, as evidenced by my lack of google notifications.

Nah. It’s probably just a coincidence. But still. Wouldn’t that be cool to have a game character named after you? I suppose I’ll never know. Unless the person who created the character is reading this post . . .

Anyone want to fess up?