Long time readers over here will remember the time, when I’d only been blogging for a few months, my daughter and her BFF sat down to warn me about the dangers of talking to people on the internet– specifically referring to what my kids called my “Imaginary Internet Friends.” It was pretty funny, go read it if you haven’t.

I mention this as context for a message I got from her yesterday:

I laughed so hard.

In other news, July is gone and we’re well into August and, yes, I’m still on hiatus from social media. Mostly.

It took me a good week to get over feeling “deprived” of input, but the days since then have been calmer and more peaceful. I’ve been spending less time online, in general. The only thing I keep open and respond to in real time is messenger, and only because that’s mostly how my kids communicate with me. I don’t ignore them. Ever.

The strategy has been effective, although I can’t say I’ve been absolute about it. It’s not quite the extreme of “head in the sand.” It’s more like sitting on the sand and contemplating the ocean while chaos reigns inland, occasionally glancing at it over my shoulder.

I do sometimes check in to see what friends are posting on FB, since very few of them post angsty political things. Every once in a while I’ll briefly skim to see what the outrage du jour is over on twitter. But I set a timer and am strict with myself about shutting it down once time is up.

It’s been refreshing, this feeling of detachment and the lack of noise.

What have I been doing? A lot of reading. A wee bit of writing. Catching up on small non-urgent stuff around the house that I’d been neglecting, as well as a couple big things. Being more mindful about getting in my steps every day. Listening to the thunder and rain during what has been an unusually wet summer. Enjoying my granddaughter. 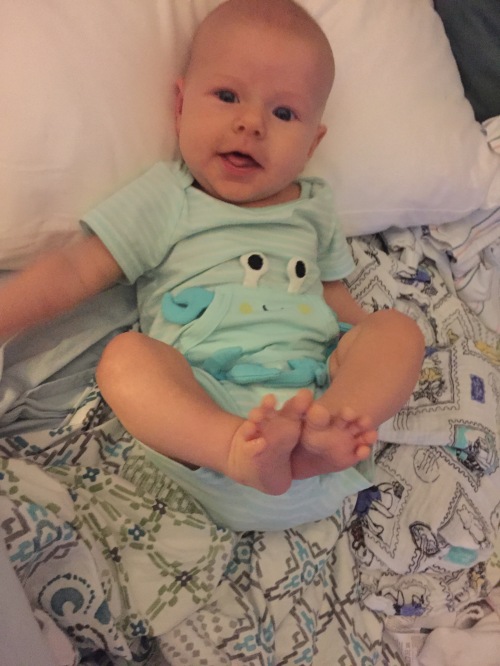 She’s so expressive for her age.

In fact, she expressed all over her diaper just before this was taken, explaining the satisfied smile.

[My daughter said I could post ONE pic, so if you’re seeing more than that it’s clearly a trick of the light. Or your eyes are crossed. Or something.]

And really, I’ve been doing a lot of sittin’ and thinkin’ — which is death when characters in a novel do it, but is apparently quite necessary for the writer. This writer, anyway.

The upshot is, I’m starting to feel little sparks of creativity amidst moments of nascent optimism. So I’ve decided to continue along these lines for a while longer.

Tagged as imaginary internet friends, social media, taking a break, this baby is SO adorable