Ain’t no cure for the summertime flu

My daughter texted me the other day to confirm that they’ll be back in town on the 24th — which is this coming Monday! — and I was confused and surprised to realize they’ve been gone two and a half weeks already. Because I’ve been sick the entire time.

I’m just starting to emerge from the menthol-cough-drop-scented haze of near-death to realize . . . I’ve lost a couple weeks.

This malaise, whatever it is, started out as a mere sore throat. Worst sore throat ever, but still, that was the only symptom. For a short time, maybe three hours, I thought perhaps it was simply a bad cold. But no, it was just gathering strength.

The only thing I’ve accomplished in the past couple weeks is to not let the cat and dog die of thirst or starvation. It was a near thing.

I lost my voice during the first week and have been whispering to them ever since:

“Jenny, are you hungry?” Like it’s some big secret.

“Do you want to go outside? No, kitty, you stay here.” This mission, should you choose to accept it, is highly classified.

“Are you ready to come in? Good girl.” Quick, don’t let the neighbours see you.

My head has produced so much green slime, I could supply several seasons of Nickelodeon and the next three Ghostbusters movies. Seriously, I’ve gone through FOUR LARGE BOXES of kleenex. So far.

And I’m telling you, somewhere underneath this middle-aged sprawl, I’ve got one hell of an eight-pack of coughing muscles going on. Of course, I’m now wearing my lungs on the outside and my diaphragm is up around my neck, but my coughing muscles are mighty impressive.

Yes, I know. This is disgusting and I shouldn’t be talking about it. I’m totally going for the pity factor, here.

While I’ve been suffering, my daughter and her husband have been enjoying a lovely and relaxing vacation in the wilds of far eastern Canada. She reports they only saw one BEAR, while they were in Maine, and it was quite small and afraid of them. Right. I’m sure its mother, no doubt lurking protectively in some nearby bushes, was terrified of them as well.

Not that I was worried.

Here’s a picture of their version of a “simple” meal while roughing it. I can’t wait for them to get back so they can cook for meeeee. Her caption read: “Eating PEI mussels in a white wine cream broth, cooked campside on PEI, while looking at Nova Scotia across the strait.” 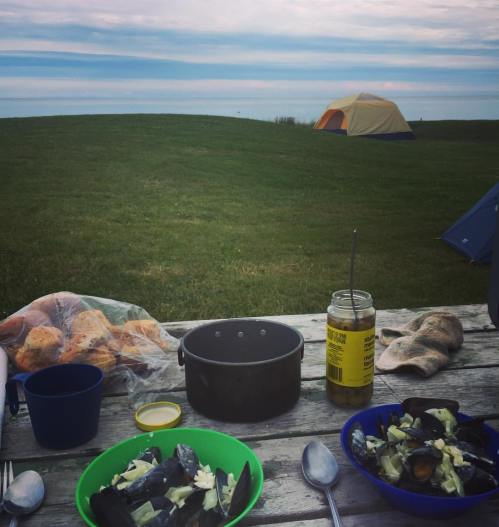 Yes, PEI is Prince Edward Island. I can tell you that’s where they were, since they’re no longer there. Here’s another shot from the same place, which she captioned: “Room with a view.”

I hope they won’t be too disappointed when they arrive chez moi in a few days to discover that, between bouts of coughing and sleeping 14 hours a day, I haven’t managed to finish clearing off space in the pantry for them. Or in the fridge. Maybe they can set up their tent and a cooler in the back yard until I get things sorted.

Oh well. As I said, at least the pets are still alive, even if they do think they’re now undercover spies. My current status is somewhat more iffy.*

*OK, seriously, I am MUCH improved. My voice is back, although an octave lower, and I’m even eating real food again. I just have that annoyingly persistent cough you get with the flu, the one that will apparently last *coughcough* the rest of my life. *cough*

Filed under health and well-being, travel

Tagged as coughing as exercise, green slime, summertime flu, the kids are moving home and I'm not ready