The A to Z Challenge, or I’ve Lost My Mind

[Note: I’m making this a sticky post for April, so new visitors will know what’s going on. Scroll down to the next post for the most recent entry. Edit to add: If you don’t feel like scrolling, here’s the link to the first part of the story (there will be 26 parts, eventually): A is for Avalanche]

I’ve been in a creative rut lately. No, not that kind of rut. More of a slump. I’m sure there are many complex reasons for this and probably I should go talk to a psychologist and spend months, perhaps years, getting in touch with my deepest . . . whatever.

But what fun is that?

Instead, I’ve decided to shake things up a bit. My creativity has always been fueled by laughter and silliness, and I’ve become much too serious and focused on the need for “perfection” in my writing. Like that’s ever going to happen. So I’ve entered the A to Z Challenge for April 2016. You can click that link for details, but the idea is to post a blog entry every day in April, excluding Sundays, each featuring a word beginning with a (consecutive) letter of the alphabet.

I considered just picking random words and writing a short thing about each one, but that didn’t seem particularly interesting or challenging. Or sufficiently terrifying. So I’ve decided to tell a story. I have no idea what this story is about or who’s in it or even where it’s set. I don’t know the genre or anything about the plot. It’s likely the length, and coherency, of the posts will vary wildly. I’m totally winging it.

Oh dear god, what the hell am I even thinking. But that’s sort of the point– to stop thinking so damn much.

I anticipate this will be a rousing success. Or it will be a complete and utter disaster and I’ll have to delete my entire blog — yes, all of it — and go into hiding. Or maybe it’ll just be a lot of fun and highly entertaining.

Don’t expect this story to make sense and we all should be fine. Probably.

If you’d like to help “guide” the story along, feel free to suggest a word or two in advance. I suspect I’m going to need all the help I can get. We start tomorrow with A.

Filed under A to Z Challenge, blogging, creativity

A girl puppy, that is! Specifically, a female golden retriever puppy. My son and his wife have added a new member, of the canine variety, to the family and her name is Sawyer.

Here’s my son holding her last Friday when they brought her home, eight weeks old:

That bow was destroyed within minutes, probably with some help from my son. She only weighed ten pounds. Look how tiny she is!

She’s still at that puppy stage of sleeping most of the time: 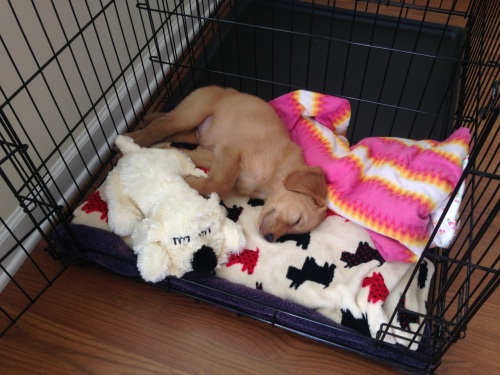 And sometimes falling asleep in mid-step, as it were: 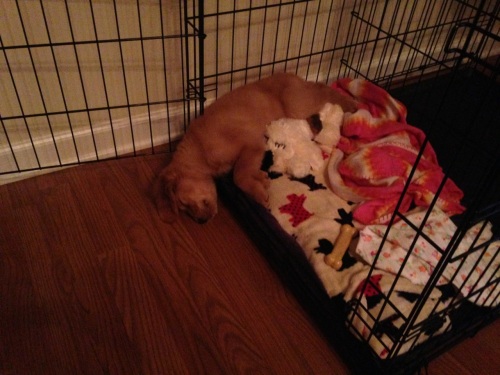 But she reportedly loves her crate and goes in there voluntarily to nap during the day, although my son says she also loves to be held.

She apparently has some innate mad retriever skillz, and has already learned how to fetch one of her toys. A text from my son:

I wish I could figure out how to post that video here. She’s chasing an empty plastic water bottle and it’s pretty funny.

Ah, retrievers. When our first black lab, Calhoun, was maybe a year old, The Dog’s Favourite Person taught him to retrieve the newspaper from the end of our driveway. This was a neat trick, considering that house was on a steep hill and it was quite a trek down an unevenly placed stepping-stone walkway to get to the driveway. Yep, quite the welcome achievement . . . until early one Sunday morning when we were out working in the yard and Calhoun decided to retrieve ALL the newspapers in the neighbourhood and TDFP then spent an hour going door-to-door, trying to figure out who was missing their paper.

But they look so harmless when they’re young. 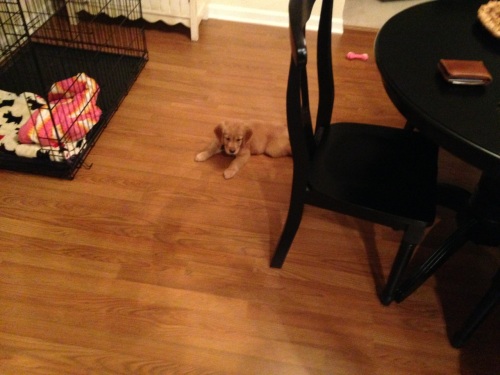 I haven’t seen Sawyer in person yet — giving her time to get used to new people and a new place — but will most likely go visit this weekend. Before the new puppy smell wears off. We’ve decided to wait to introduce the pup to The White Ninja until the size difference is a bit more . . . equitable.

I hope TWN won’t be too jealous when I come home covered in soft golden puppy fur. Then again, she might not notice. She’s been awfully busy lately trying to conquer the kitchen garbage can (which was, fortunately, empty at the time):

While also doing her best to convince me how sweet and innocent she is, not to mention flexible (can’t do a pet post without at least one pic of the cat, now can I?). 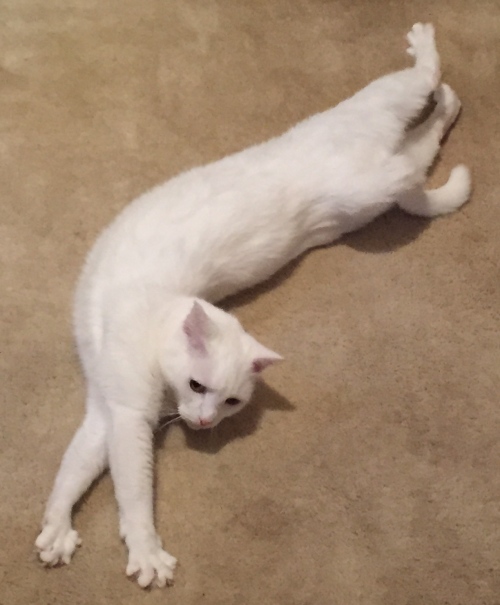 It might be working. Even so, I’m not going to let her get anywhere near the neighbours’ garbage cans any time soon.

So that’s the good news from here. What’s up with the rest of you? Got anything interesting to report?

Tagged as golden retriever puppy, new addition to the family, puppies are so sweet