Arts and crafts and other trauma

I’m trying to get back to posting regularly over here, but I’ve been writing and am fresh out of ideas for a blog post this week. Not that I’m going to let a simple thing like that stop me. I figure I’ll just ramble on for a bit and eventually I might make some kind of sense. Or not.

My mom has been cleaning out cupboards in her house. She has lived in that house since I was five years old, so you can imagine there is a bit of accumulated stuff tucked into the odd corner. Stuff that isn’t necessarily hers. And some stuff that is, regrettably, mine.

Seeing as how her polite suggestions that we box up our stuff and take it with us (I have three sisters and we all happily left various childhood treasures behind) have been largely ignored over the years, she recently decided to just do it herself. But there is some confusion about which stuff belongs to whom. This prompted a few phone calls and text messages this past weekend and one of those was my older sister texting a picture of some “artwork” and asking, “Is this yours?”

Sigh. Yes, I made that. In middle school, I think. It’s plaster poured into a milk carton, which we then had to carve into some kind of thing using blunt instruments. Pure torture. I hated every minute of it. I asked my mom to throw it out, but I suspect she’s going to pack it lovingly into a box so I can take it home with me one day. She seems determined to make me appreciate a creativity gene I just do not possess.

I am not artistic. Not when it comes to arts and crafts like drawing or painting or sculpture. Or sewing. Or cutting and pasting construction paper. Or anything to do with glitter or beads or styrofoam or toothpicks as construction material. I’m not good at it. I’ve always known I’m not good at it — all of my sisters are very talented in these areas and the contrast is stark and undeniable — and that doesn’t bother me. Really, I just don’t care. I have other talents.

Those of you relatively new to this blog might not realize that I am in fact somewhat infamous for my [lack of] drawing skills. After one of the first luncheon meet-ups of Imaginary Internet Friends, everyone demanded to see pictures. I hatehateHATE having my picture taken and refused to let anyone take any. Yes, I am a tyrant. So I drew this instead:

Everyone agreed it was hilariously pitiful. [I’d link to that blog post, but it was on a different blog and we broke it anyway.] Delighted my drawing was received with the silliness intended, I’ve continued in those efforts.

Here’s one from a couple years ago, of me having a fine needle aspiration biopsy of my thyroid: 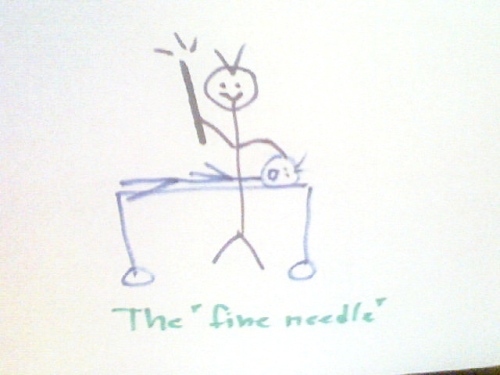 And the aftermath [blog post and more “pics” here]: 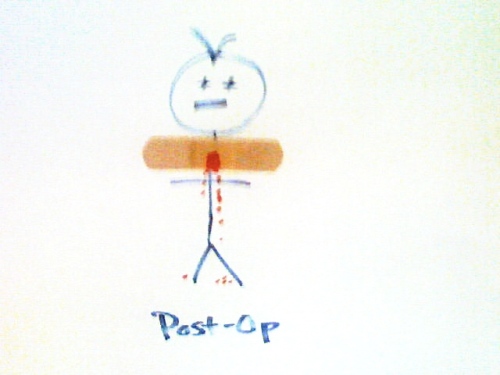 And then there’s the one of me imagining my daughter calling me, as promised, after being eaten by a BEAR [blog post here]:

Lest you think I labour over these things, these are all first drafts. No do-overs. Well, except the bear. After the first attempt, I realized I’d better draw the stomach contents first, then fit the bear around it, er, her. Whatever.

I really don’t care if people laugh at my lack of artistry. I’ve been laughing at it all my life. Although, inexplicably, I did manage to create some adequate pottery back in high school. Maybe I’ll round up a few pieces . . . here, I think there are a few upstairs too, but these are the ones I gathered up in a quick tour downstairs. I made these and I like them: 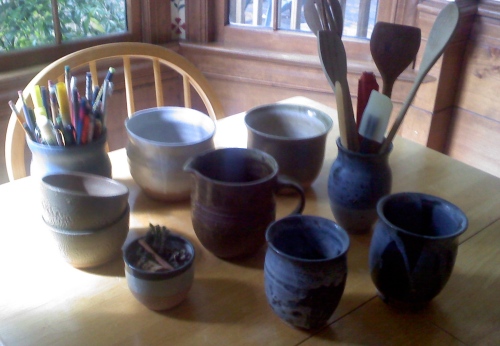 Anyway, back to drawing. I found this link through twitter and it totally cracked me up: Draw a stick man.

This is perfect for me! I’ve actually drawn several now and it makes me laugh every time when it becomes animated and moves clumsily through the little story, aided by other clunky items also drawn by me. I thought I was bad with a marker pen, you should see the results using a fingertip and the track pad on my MacBook. Or maybe you shouldn’t.

Is there anything like this you know you’re just not good at? Something you always hated but did it anyway because it was required at school? Can you laugh about it now or is it still a source of frustration or embarrassment?

Or are you really good at arts and crafts and wish you were back in school where you had unlimited supplies and an excuse to indulge your inner artist? It’s okay to admit it, I won’t think less of you. As long as you don’t make me join in.

17 responses to “Arts and crafts and other trauma”