My daughter was in town last week for a highly anticipated visit, part of which was spent at the beach. Hey, it’s summer. Time at the beach is practically a requirement down here. She left The Intruder Cat behind in New Orleans, but brought along her five-month-old black lab puppy, Jenny. Which was fine. Well, it would have been fine. Except Jenny wasn’t the only pet in residence. I’d also agreed to take custody of Quincy The Wonder Dog for the week. Plus my own ancient curmudgeonly cat. I know, what was I thinking?

So my daughter dropped off The Little Terrorist, as Jenny quickly became known, and she and her brother went to the beach in SC with their dad for several days. Luckily, Jenny is crate trained and I still had a dog crate in the basement.

Now, I love black labs and all three of our dogs have been labs, either purebred or some kind of lab mix. So I KNOW how hyper they are. And after 11 years of dealing with The Wonder Dog, I know exactly how um, that is, how wild ass crazy they can be.

Even so, I was surprised by Jenny’s sheer exuberance. She SO wanted to be best friends with Quincy (and my cat, when she could find her) and was convinced that if she just tried a little bit harder, things would all work out. She was mistaken. Surprise. But the big shock for me was realizing that, in comparison, The [Sadly Maligned] Wonder Dog was a model of calm well-behaved patience and tolerance. Made me feel old.

I tried to take some pictures, but mostly they were a dark blur of moving dog parts. My cell phone is my only camera these days and it pauses for several ominous seconds between when you push “take” and when it actually takes the damn picture. My old cell phone didn’t do this, so I assume this is some fancy new technology, even though I have no idea what’s going on in there. Maybe it’s contacting Homeland Security so they can run the image through a facial recognition program. Probably notifies MI-6 and the Mossad as well. Whatever. But during that time, the tableau has completely changed and I find I’ve taken a picture of . . . carpet that desperately needs to be vacuumed.

My son took this pic, wherein Jenny is attempting a submissive attitude. That didn’t last longer than it took her to notice The Wonder Dog had taken possession of her bone.

Here she is taunting him with her massive hunk of knotted rawhide. No, that is not a euphemism. Quince is not allowed to have rawhide treats — he’s too strong. He tears off huge chunks and swallows them whole and then I end up scraping a slimy fetid mess off the carpet in the middle of the night while thinking up horrific tortures to inflict on whoever invented the damn things.

Here they are together, promising to be good if I’ll let them come inside. If you’ve ever wondered, this is exactly what it looks like right before all hell breaks loose. 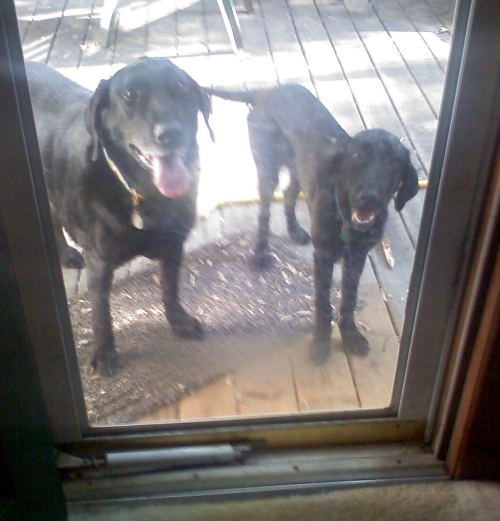 And here’s Quincy pouting. Wondering when His Favourite Person is coming back to rescue him. Poor baby.

But mostly we had fun and the cat didn’t inflict too much lasting damage on either dog. A little canine therapy, perhaps a few sessions of shock treatment, and they’ll be good as new. And then the kids came back from the beach and I discovered they no longer had any idea how to fend for themselves, given the amount of food I cooked for them and their friends during the rest of the week. Ahem.

My daughter did make the blueberry pie featured in the last blog post. As an early birthday treat for her brother. Who promptly laid claim to the leftovers and said, “You’re not going to eat this, are you mom?” and took it home with him (which was the plan). And then my daughter somehow talked me into staying up past midnight on her last night here to bake Monster Cookies to take with her on the 13-1/2 hour drive home. Honestly? There was very little persuasion involved.

[I mentioned Monster Cookies on twitter and received a request for the recipe. Rather than add it to this already lengthy post, I added a page called “Misc.” and put it over there. Hope you enjoy, Adrienne!]

So now my house is quiet again and the dog hair has been vacuumed up, narrowly escaping inclusion on the list of Superfund sites, and the cat has emerged from pissed-off seclusion. I’ve already eaten the handful of cookies allotted for my own personal consumption. Although they were satisfyingly large, they didn’t even come close to filling the empty aching void that opened up again when my daughter left. Given her penchant for spending time in far off places, you’d think I’ve have gotten used to that by now. You’d be wrong.

Filed under just for fun, Quincy the Wonder Dog

9 responses to “Kids and Dogs and Cookies, Oh My!”