The most ridiculous thing I’ve ever written

Truly, this is the most ridiculous thing I’ve ever written. Once again, the Emmy nominated (he pays us to say that) snarly-bearded word demon sometimes known as Chuck Wendig has issued a Flash Fiction challenge. He calls it Baby Pulp. Or Baby Noir. Yes, pulp/noir fiction featuring babies, for godsakes. Because his wife is hugely pregnant and he has babies on the brain. As if that somehow makes up for her having a baby in her belly. I’m not entirely convinced he’s going to survive to see his spawn.

I’ve never read “pulp” fiction but I gather it’s an over-the-top escapist fantasy type of thing that originated back in the early 1900’s when magazines were printed on cheap pulp paper and contained lurid stories with larger than life heroes who rescued gorgeous dames from evil villains. Sort of like the “Guy Noir” episodes on Prairie Home Companion. I think. The language is, um, different and it took a bit longer to write tonight than the last one. Especially since my mom called in the middle of it and I couldn’t exactly say, “Sorry, Mom. Can’t talk now. Writing baby pulp.” Sigh.

I swear I’m going to stop reading that man’s blog.

Some sick perp was busting preemies out of their incubators before they were fully cooked and someone had to put a stop to it. Since I’d been here the longest, going on seven weeks now, I figured that someone was me.

Who am I? The tag on the plastic crib says Richard W. Hollings, III, but all the crepe-soled dames call me Rick. And I’m the biggest baddest preemie on the 10th floor.

One of the do-gooder apples in this bushel basket of a hospital had gone bad. Worm infested and rotten to the core bad. Could be a nurse or a doc or even one of the lab rats who were all the time running their sadistic tests. They all had access. But my eyes had finally started to focus week before last. I had my suspicions.

Three nights ago they nabbed that cute doll with the flaxen peach fuzz hair and big baby blues. They told the parents she hadn’t survived the night, but I saw the shadowy figures making the switch just before my 3:00 AM feeding. I heard them talking as they swaddled the poor wee stiff they left behind. Bold as brass they were, carrying on as if none of us could hear them.

“Are you sure it’s a close enough match?”

“This one will fetch a good price.”

We’d gotten a new arrival today and she was a looker. Soft black curls, pink rosebud mouth and gams that you could tell were one day going to make a man sweat. The whole staff made a big deal over her, but one of them seemed a little too interested, if you get my drift.

They called her Samantha, but I knew she was Sam. I figured she was marked as the next vic. And I had a plan.

I didn’t have much time. My parents were due to spring me from the joint day after tomorrow. But Sam just had a mild case of jaundice and already she was hooked up with the goggles and special lights. I knew these goons would make their move soon.

I watched, eagle-eyed as the staff performed the familiar laconic dance of their late night shift change. Amateurs always pull a heist at night, when no one is around. They think darkness is their friend. But there’s less cover and fewer distractions at night. And no chance at all of disappearing into a crowd.

There he was, the doc with the eye twitch and thousand dollar loafers. Making his rounds. With the blowsy big-haired nurse who paid more attention to him than to her patients.

They stopped at Sam’s bassinet, just a couple feet away from mine.

“This one is perfect. Fits the latest order to a T.”

“She’ll bring us a fortune.”

The nurse pulled a bundle out from under her ill-fitting uniform and handed it to the doc. “Quick, make the switch before she wakes up.”

I’d been saving up all day. And I’d long ago perfected my aim on the sour-faced old biddy who always fastened my diapers too tight. I wriggled my way free and let loose with a prodigious stinking stream that soaked the backs of the black-hearted miscreants.

Their cries of surprise and dismay were nothing compared to the screams of outrage powered by my formerly underdeveloped lungs. My pals Ryan and Scott and Jessica chimed in, right on cue. Soon the entire nursery was pulsing with the mighty red rage of babies defending one of their own.

The rest of the staff rushed in and Maggie, my favourite night nurse, the one who sometimes sang to me back in the days when my head was the size of an orange, shrieked when she spotted the partially unwrapped bundle in the clutches of her evil colleague.

“What are you doing with a dead baby in the nursery?!” Maggie has a lovely soft singing voice, but the woman knows how to project when it counts.

It took a while for them to calm everyone down, even after security came and hauled away the twitchy doc and his smarmy nurse. The orderly grumbled as he cleaned up my mess and my diaper was once again too tight. But I didn’t care.

Sam had managed to push the goggles up on her forehead and was staring at me with her melted-chocolate brown eyes. And I swear, just before they turned the lights down low, she smiled at me.

Some might say it was gas. But I’ve been up and down these sterile halls and around the corner to the vending machine a time or two and I know better.

Someday, kid. You and me.

Welcoming a new addition to the family

What, you were expecting to see a baby? No, it’s a black lab puppy! Why yes, we do consider our pets to be part of the family. And this is the newest family member, taken on by my daughter and her BF. Isn’t she sweet?

I can almost smell the “new puppy” smell.

And look at those adorable little blue puppy eyes. 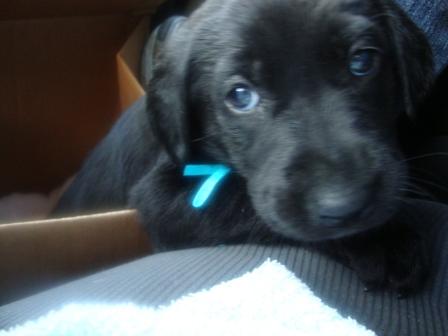 Here she is a week later, ready to take on the world. Or at least the back yard.

Her name is Jenny — named after Jenny Lake in Grand Teton National Park, WY, one of the many stops along the Epic Tour of BEAR Habitats last summer. Here’s a cool picture they took of Jenny Lake. 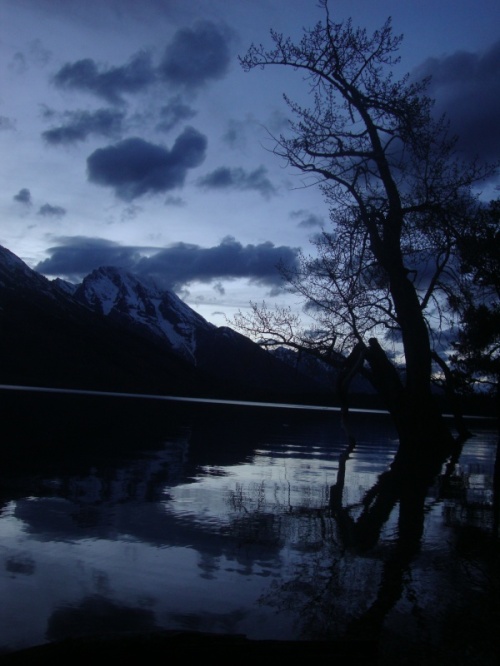 Easy to see why they’d want to commemorate one of the gorgeous places they visited on that trip. They had thought about naming her Kootenay after the park in British Columbia — until I pointed out that everyone would soon be calling her “Cootie” and that was really not a nice thing to do to a dog.

I’m just glad they didn’t decide to name her Blackie. Or Grizzly. Or OMG, BEAR!