It snowed just enough last night (reportedly 0.4 inches) to make it official: the first time there has been measurable snowfall on Christmas Day in this area since 1947. My daughter (living in New Orleans) wanted proof, so here is the picture I took and texted to her last night when it first started:

It was DARK. What did you expect?

This is what we woke up to this morning:

Under all that snow is the flowering peach tree. 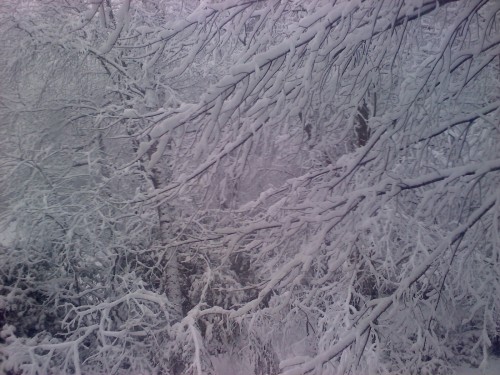 You can see it’s the kind of heavy snow that adds definition and depth to the stark bare bones of winter trees. And breaks their branches. Luckily, we didn’t have any sleet or ice with this storm. Even so, I heard the distinct sound of a couple distant transformers blowing early this morning. 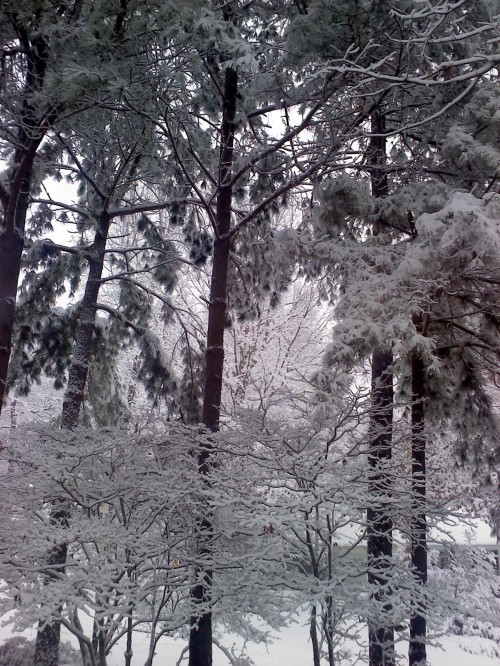 Back yard is enclosed in a wall of white.

Can't wait to see the moonlight through snowy pines.

Power here has flickered off and back on again several times this afternoon but, so far, I still have power and an internet connection. And a backup snuggling cat heat source. 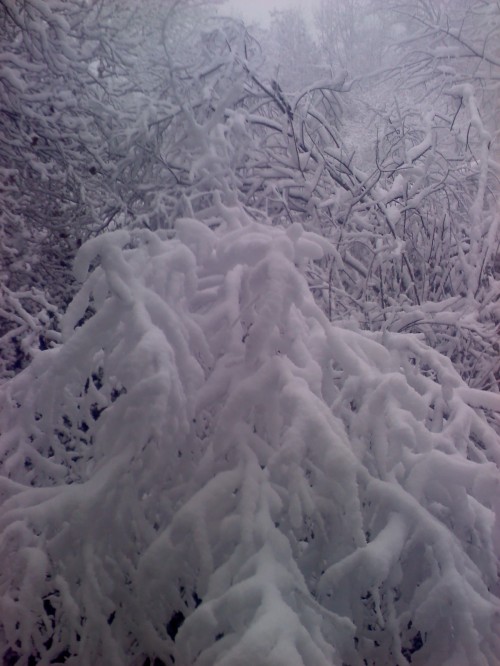 I also have plenty of food, as I stocked up a few days ago — not in anticipation of the storm, but because my daughter and her boyfriend are scheduled to arrive tomorrow, traveling by car, for a week-long visit.

Poor birds are going to need a wee shovel

Am I worried they won’t make it? Nah. If the plows can’t carve a path for them, probably they’ll just hike. Knowing them, they’ll hike even if there IS a clear path.

My daughter hiking Aconcagua a couple years ago. Yes, in the Andes Mountains.

Virginia is a small town in the northern “arrowhead” region of Minnesota, north of Duluth, on the Mesabi Iron Range. It was one of the places where my high school debate team traveled on the annual circuit of debate tournaments, with my dad as debate coach. I wasn’t a member of the team — oh, the decisions we come to regret — but I remember a story dad told about filling out the standard judges’ form on one such trip. Up near the top of the form was a line where you were to fill in the location of the tournament. He wrote, somewhat above the line, “Yes, Santa Claus, there is a…” and then wrote “Virginia” on the line.

Of course, I’d heard the famous quote, “Yes, Virginia, there is a Santa Claus” and thought that was a pretty clever twist. But I didn’t really know the details behind the anecdote, just bits and pieces I’d heard here and there. I was never curious enough to look it up and find the original source. Until today.

I imagine many of you do indeed know the whole story — after all, it is very famous — but for those of you who don’t, or those who are perhaps in need of a reminder, here it is [lifted from Beebo]:

Yes, Virginia, There is a Santa Claus

We take pleasure in answering thus prominently the communication below, expressing at the same time our great gratification that its faithful author is numbered among the friends of The Sun:

I am 8 years old. Some of my little friends say there is no Santa Claus. Papa says, “If you see it in The Sun, it’s so.” Please tell me the truth, is there a Santa Claus?

Virginia, your little friends are wrong. They have been affected by the skepticism of a skeptical age. They do not believe except they see. They think that nothing can be which is not comprehensible by their little minds. All minds, Virginia, whether they be men’s or children’s, are little. In this great universe of ours, man is a mere insect, an ant, in his intellect as compared with the boundless world about him, as measured by the intelligence capable of grasping the whole of truth and knowledge.

Yes, Virginia, there is a Santa Claus. He exists as certainly as love and generosity and devotion exist, and you know that they abound and give to your life its highest beauty and joy. Alas! how dreary would be the world if there were no Santa Claus! It would be as dreary as if there were no Virginias. There would be no childlike faith then, no poetry, no romance to make tolerable this existence. We should have no enjoyment, except in sense and sight. The eternal light with which childhood fills the world would be extinguished.

Not believe in Santa Claus! You might as well not believe in fairies. You might get your papa to hire men to watch in all the chimneys on Christmas eve to catch Santa Claus, but even if you did not see Santa Claus coming down, what would that prove? Nobody sees Santa Claus, but that is no sign that there is no Santa Claus. The most real things in the world are those that neither children nor men can see. Did you ever see fairies dancing on the lawn? Of course not, but that’s no proof that they are not there. Nobody can conceive or imagine all the wonders there are unseen and unseeable in the world.

You tear apart the baby’s rattle and see what makes the noise inside, but there is a veil covering the unseen world which not the strongest man, nor even the united strength of all the strongest men that ever lived could tear apart. Only faith, poetry, love, romance, can push aside that curtain and view and picture the supernal beauty and glory beyond. Is it all real? Ah, Virginia, in all this world there is nothing else real and abiding.

No Santa Claus! Thank God! he lives and lives forever. A thousand years from now, Virginia, nay 10 times 10,000 years from now, he will continue to make glad the heart of childhood.

So this is my holiday wish for you. No matter where you are on this night, or however and with whom you choose to celebrate, I hope you still believe in unseen wonders and the glad heart of childhood.

Happy Christmas to all, and to all a good night!