Is there a draft in here?

Hmmm. It looks like someone power-washed my blog while I was gone. Or something. Still seems a bit, um, damp in here. Is someone missing a kilt? At least, I think this is a kilt. Or it was . . .

Glad you all had fun in the comments while I was gone. I had a fantastic time at the beach! This getaway was long overdue and I’ve already decided I’m going back again. It was a worthwhile investment in both my sanity and my writing. No, they are not mutually exclusive.

There was more activity at the beach than I anticipated this early in the season. The air was nice and warm, but the water? Brrrr. The first few days I saw a lot of wind surfers. Or maybe they’re called kite surfers. Some of them let the wind pull them up out of the water, as high as 15 to 20 feet, and then float along for several yards before touching down to surf again. Serious upper body strength going on there. 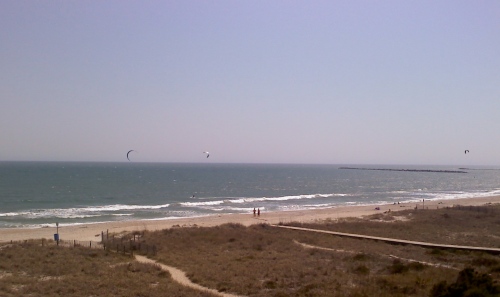 This guy was having a tough time getting started. Made me wonder how you stop — it’s not as if you can just switch off the wind. 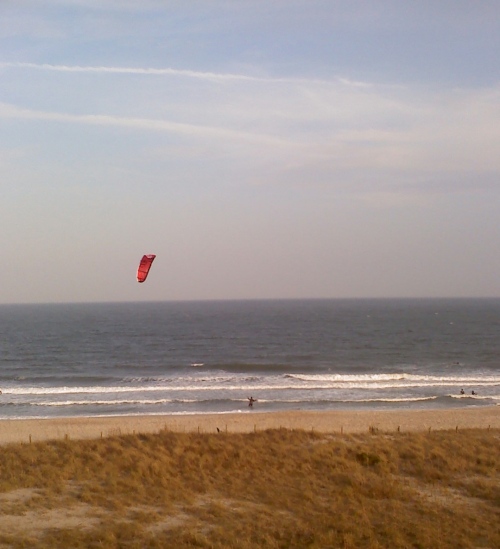 There were storms one night and I woke the next morning to SHARKS!

Okay, those aren’t sharks. They’re people in wetsuits sitting on surfboards. Everyone who spent significant time in the water was wearing a full wetsuit. But they do look like predators, all lined up out there, waiting to devour the next unsuspecting wave.

This is a picture I took at dusk of a nearby restaurant and its pier — outdoor seating for diners, weather permitting. There was a wedding out on the pier early one evening. Lovely.

What’s that? Why yes, I did also spend a wee bit of my time there writing. It wasn’t all spent sitting on the balcony staring at the ocean, feeling the sun on my face and the wind in my hair, listening to the crash of waves punctuated by the cries of sea birds.

I seem to have also managed to complete a draft of my novel.

Now before anyone gets too excited, my definition of “draft” is probably not the same as anyone else’s definition. For instance, it’s not the famous “truck draft” Jenny Crusie talks about. Believe me, if I were to get hit by a truck, no one reading my version of a draft would think, Hey, this just needs a bit of editorial tweaking and we’re good to go.

There is still a LOT of work to do. But it has a beginning and a middle and an end. Even better, it has three acts in eight (or so) sequences and turning points and a “this changes everything” midpoint and escalating tension and a solid plot and — well, it’s enough that I’m calling it a draft. A very rough draft. Okay, yes, parts of it are very smooth and polished. Huge sections, even. Still, it needs a lot of work. Including a couple scenes that are mostly notes to myself about what goes there and how it needs to happen.

I’m sure any writer with more experience than I have — hell, maybe even those with less experience –will read this post and think, Oh for godsakes, this is not a big deal, anyone can finish a rough draft. Yeah, well, I was starting to think I never would. For me, it’s a big fucking deal.

So I’m happy and hugely relieved right now, in a stunned I-can’t-quite-believe-it kind of way, and feeling like maybe I can do this whole writing thing after all.

Although, I suspect that confident sense of accomplishment will fade faster than my sunburn (yeah, totally forgot the sunscreen). Because, you know, as I might have mentioned, I’ve got work to do.

But still. Damn. I completed a rough draft.