There was a full moon this weekend. Folklore calls this full moon in January the “Wolf Moon” and, according to Wikipedia:  “Its name comes from hungry wolf packs that would howl outside the villages of Native Americans.” 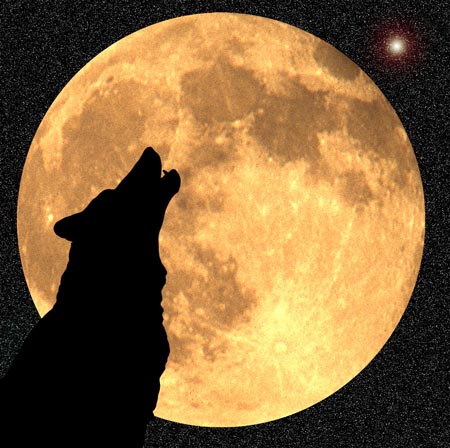 Well then, how appropriate that there was howling in my neighborhood this weekend. Wolves? No, something far worse. After all, wolves only howl at night. This howling is incessant and unrelenting, all day and well into the night, accompanied by screams in turn both terrified and excited.

It’s a horrible thing, huddled here inside, trapped by snowfall and hearing the cries. Waiting with tense dread-filled anticipation, listening to the ululating screams that rise and fall, sometimes startlingly near, then fading away like fleeing prey, often ending abruptly– leaving you to imagine a flight cut short, ending badly in an unconscious sprawl of mangled limbs and warm blood gushing, cooling and thickening as it stains the pristine snow. Leaving you to imagine the silent aftermath.

Take a look at this picture. What do you see?

You see them there, among the trees? They come en masse, like ants swarming a sticky mess of spilled juice left on the kitchen counter overnight. The snow has barely stopped falling before they’re out there, a brightly jacketed screaming horde of thrill-seekers, flinging themselves and their children headlong down a steep slick expanse of snow and ice. Not completely devoid of the instinct for self-preservation, they post lookouts at the top of the hill, stopping intruders until the coast is clear below.

This happens every time it snows. They congregate as if this is the only hill in town, as if conquering it, mindlessly, over and over again, is their only goal. There is always some unfortunate event. Sleds overturn, bodies collide with other bodies or with the ground. A few unlucky souls have managed to swerve off the bridge and into creek at the bottom of the hill. One year, a victim was completely up-ended when he turned his back to the action and others couldn’t steer away in time. He escaped with a mild concussion, bones and flesh intact.

The chorus of screams is relentless. So is the irregular rhythmic schhuussch of sleds over packed snow. It’s enough to make a person long for the howl of wolves.

Oh hell, I think I might be one snowfall away from becoming “that woman.” You know, the one who always yelled at you to get off her lawn when you were a kid, or threatened to call your parents if you didn’t stop riding your bikes through her garden. Sheesh. Couldn’t she tell they were horses and that we were on an important mission?

You might be wondering what this has to do with writing. Well, nothing, really. Except it’s good advice in general, but maybe especially if you’re a writer, not to be that person standing there with your back to danger, lost in your musings and oblivious to all the people around you yelling, “LOOK OUT!” That sometimes you need to broaden your view to see the entire picture.

And to keep in mind that no matter how much fun you’re having — or conversely, how irritating it is to be subjected to the noisy intrusive exploits of others — eventually the snow is going to melt.

Also, you know, if you wake me up with your screaming at the crack of dawn after keeping me up listening to it half the night, I’m going to write a tale of wolves. And you’re going to be the prey.

Just how fast can you flee down that hill?

Filed under health and well-being, writing

4 responses to “Wolves, Writing and Screaming”