What I Did During My Summer Vacation

Okay, fine, it wasn’t an entire summer, just a long four-day weekend (with a good portion of two of those days spent getting there and back) but I felt lucky to have had even that much time off. We traveled to Minneapolis for my niece’s wedding a week ago — my daughter, her boyfriend and I — and since pictures were taken (mostly by others), I decided to share a few (with thanks to those others).

BTW, I have discovered a new strategy for defending myself against people who aim cameras at me: scowl ferociously and keep moving at all times. Consequently, none of the pictures worth looking at were of me. Really. Not one.

The kids wanted to see the sights, so Saturday we drove around Lake Calhoun and Lake of the Isles, where we stopped and walked for a while. 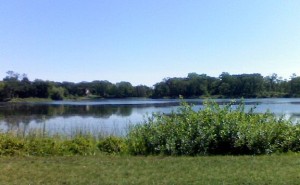 The weather could not have been more perfect — 78 degrees with low humidity, a light breeze and clear blue skies.

They also wanted to see the U of M campus. No idea how we ended up downtown instead [ahem], but they were delighted by the ingenious practicality of the vast skyway system and my slight detour was mercilessly mocked graciously forgiven.

We eventually made it to campus, where we saw the brand new stadium and then ate lunch at Stub & Herbs, one of my favourite hangouts back when I was in college there, and I discovered that my ability to park in a space smaller than an actual car has not improved with time. 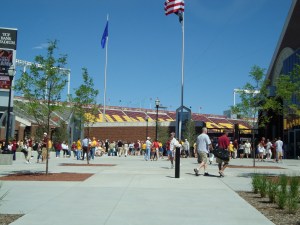 The rehearsal dinner Saturday night was at the Walker Art Center. I didn’t take pictures, but here is one I stole from this site http://bit.ly/2nQ9g2

We were in the room looking out that top window and the upper angle of the window made it seem like the entire room was on a slant and you expected your dinner, which was fittingly artistic as well as delicious, might slide off the table at any moment. It didn’t.

Sunday morning I had brunch with one of my imaginary internet friends who lives in the area (I don’t normally consider a place two hours away via car to be “in the area,” but I’ve learned imaginary friends have an odd determination about things like that). There were no pictures, just indelible moments of friendship and conversation.

Late Sunday afternoon, the wedding and dinner reception were held in my older sister’s back yard. Her house is on Lake Minnetonka, which is a very large lake. It’s a very large house. Her back yard is, hands down, one of my absolute favourite places to sit quietly and enjoy the beauty of Minnesota.

The front yard isn’t bad either, and that evening it featured a string quartet serenading the Dancing Hares (or so it seemed) while we enjoyed post-wedding/pre-dinner cocktails. 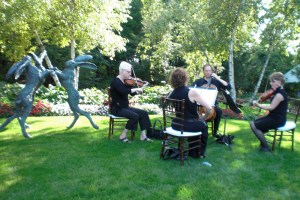 Here are some pics of the back yard, including the chuppah — the canopy under which the bride and groom stand during a traditional Jewish wedding ceremony. 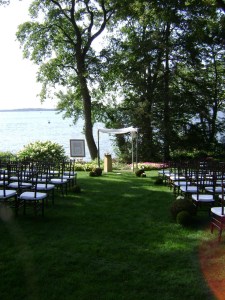 Everything was so beautiful. Even the cake. 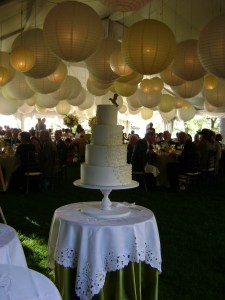 And the hanging balloon-like lanterns. 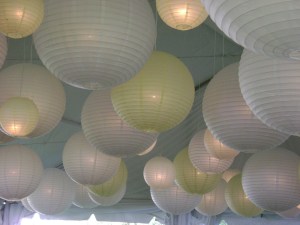 And as if there weren’t enough beauty outside, there were ornate flowers inside as well.

A good time was had by all. The bride was gorgeous, the groom handsome and both were glowing with happiness. There was much visiting and catching up with relatives and long-time friends, enough laughter and talking to make your brain explode er, to last until the next momentous occasion brings us together again.

Which I sincerely hope will not occur in the midst of a Minnesota winter.

10 responses to “What I Did During My Summer Vacation”