Today brought six inches of snow and an unexpected day off from work: 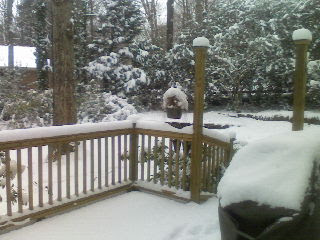 And a new President:

It was a very good day.

This was a day of endings and beginnings, for looking back and moving forward.

It’s late now, after midnight. The football game and our team’s season are over, the television and stereo silent. My son has gone to bed, his friends gone home, the echoes of good-natured shouting and cheering fading even as car doors slammed and engines revved their way to a quiet distance through the night streets.

Outside it is raining, not hard, just enough to coat the deck boards with a cold wet gloss, enough to mirror the white glitter of holiday lights still strung along the rails.

My lifting muscles are pleasantly sore, a small scrape on the back of my hand evidence of the afternoon’s labour. My daughter has called three times since the last box was unloaded and I drove away into the waning rays of a winter sun painting the rain clouds on the horizon, the sound of our voices reassuring both of us as she settled into the unfamiliar campus apartment.

The day began early with caffeine and coffeecake, camaraderie and conversation, the confident direction of an experienced Board turning over heavy files and weighty responsibilities to the apprehensive yet eager vision of the new.  The pleasure and honour of two years’ hard work and stewardship balanced by the guilty, almost giddy relief of finally handing it off to the care of others, knowing ours was a job well done, trusting their effort will be no less.

Now at the end of the day it is quiet. I am tired but reluctant to get up and go to bed, to shift the warm slumber of the cat snuggled against my side, disturb the utter stillness of the night. The tree in the corner seems to stand a bit taller tonight, as if it knows these are its last moments as a fragrant shining symbol of past laughter and tears, of future hopes and dreams, its lights reflecting a bit brighter on ornaments that tomorrow will return to storage to wait for their next season, the next tree.

Tomorrow there is work to be done, one more year of memories to carefully wrap and pack away, needles to vacuum, boxes to be filled. But tonight is peaceful with the quiet contentment of things accomplished, ended to make way for the future.

How time does fly

Well, I was mistaken. Not to mention foolish. It happens.

The book is not done. And there is no way in hell I’m sending a submission of an unfinished manuscript. A writer pretty much gets one chance to impress an agent and I hope I’ve learned enough about the process not to take that lightly.

So I’ve granted myself an extension. Hey, the published authors I know get extensions all the time.

I expected I would feel defeated and demoralized if I didn’t meet this deadline and I’m rather surprised to find that is not the case. This goal-setting experiment has left me even more determined to finish. It was also educational.

I have learned that December is probably never going to be a very productive writing month for me. I’ll take that into account in the future when some publisher asks me how long it will take to write the next book.

I have learned that setting a goal with a specific date really does improve my productivity. I accomplished so much more in the last two months than I would have without a goal.

I have also learned that when my daughter is home for any length of time without homework, I will watch a lot of television. Whether I want to or not. And that Prime Time is in direct conflict with Writing Time. I am now caught up on all the happenings with House, Grey’s Anatomy, some other show I can’t remember the name of, AAC basketball, NCAA football, NFL football, various movies (the funniest of which was Little Miss Sunshine — watch it if you haven’t), Jeopardy, Wheel of Fortune and Planet Earth (which is awesome). My daughter has thoughtfully set reminders on my cell phone so I won’t miss the new episodes of 24 and Burn Notice. Sigh.

Scientific process at work here. Really. Jupiter (my, ahem, ruling planet) enters Aquarius today, which is supposed to be good for communications. However, Mercury goes retrograde on 11 Jan and this is apparently a bad time to, among other things, submit manuscripts. I kid you not. [I hope it’s a good time for college students to return to campus, because that rare astrological event happens about the same time.] A writer friend said Saturn went retrograde a few days ago and that bodes well for finishing things. Like manuscripts. There is a solar eclipse on 26 Jan and the new moon also goes retrograde. Then on 1 Feb Mercury goes direct and the dish runs away with the spoon.

I have NO IDEA what any of this means. Except that it sounds as plausible as anything else and I have decided 2 Feb is my new deadline. Because I’m supposed to give Mercury an extra day to stabilize.

Whatever. You all should watch for falling stars and things that go bump in the night sky. I’m going to be busy writing.