Today is Halloween. This is what my sister, Booko, does to pumpkins this time of year: 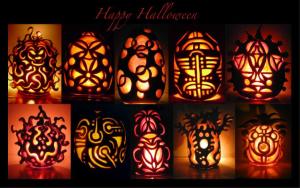 Yes, she carved each and every one of them. Amazingly talented, is my sister.

Being much less adept with a knife, I think of Halloween as the annoyingly predictable day when the neighborhood kids come to ring my doorbell, sending The Wonder Dog into frenzied fits of insanity and the cat into traumatized seclusion, interrupting my solitude with their insincere and unconvincing cries of “trick or treat!” Of course, there are the practical souls who stand there silently, petulant, stubbornly holding out their buckets and pillowcases, recipients of a largesse earned by mere entitlement rather than effort or threat of force, their young faces costumed in ghoulish aspects of expectant greed.

No, this is not my favourite holiday. How could you tell?

But today is also Samhain, the dark twin of Beltane, sometimes known as All Hallow’s Eve — a night when it is said that the veil between the worlds of the living and of the dead is at its thinnest. Some say it is a night of unimaginable power. A night cloaked in mystery and pagan ritual, shrouded by superstition and fear. A night when the spirits of the dead roam freely among us, causing mischief and harm, unappeased by meager offerings and reined in only by the approach of dawn. Tales are told of incautious souls unwary enough to be lured by curiosity to the other side, and of those unfortunate few who do not make it back before night gives way to light.

As an antidote to the crass commercialism of the modern holiday, and just generally to cheer myself up, I tried to find a poem I could post here that would convey the dark eerie spookiness of the old pagan beliefs — that the threshold between the living and the dead is easily crossed on this night — but couldn’t find any that quite fit the right mood. So I wrote my own. I hope it’s as much fun to read as it was to write. May your Hallow E’en be a night of safe travels, one disturbed only by visitations of benign spirits.

come
dance
with
me

What will it cost you?

My daughter called from Argentina the other day, relieved to report that she’d finally received her absentee ballot. We requested it weeks ago and she was starting to worry it wouldn’t get to her in time. This will be the first Presidential election in which she’s been old enough to vote and she’s extremely excited about that. She’s taking the whole thing very seriously. She even went online to research the unfamiliar candidates on the ballot, so she could make informed decisions.

So it was a huge shock when a friend, who is also studying abroad, told her not to bother sending her ballot back via regular Argentinean mail. Apparently, the mail service there is unreliable and quite a bit of mail never makes it to its destination. And it’s so slow that even if the ballot were to make it all the way to the U.S., it would be too late to count. Her only option would be to send it via UPS. And doing that would cost the equivalent of fifty US dollars.

I can’t even describe how upset she was to learn this. She’s a college student on a tight budget and has pretty much accounted for every conceivable expense while abroad, including extracurricular travel she hopes to do. She’s counting every penny until she comes home and can get a part time job to earn spending money again. She doesn’t have an extra fifty bucks just sitting around. So she asked me what I thought she should do. Take a chance on the Argentinean mail system? Spend the money on UPS? Or just not vote?

We discussed that last option first. Talked about the cynicism of whether one vote really made a difference, whether or not it would even matter if she voted. She told me again how important this was to her, to finally vote in a Presidential election. How much she had been looking forward to it, how much it mattered to her. She debated taking her chances with regular mail, and realized how unacceptable it would be to never know whether or not her ballot had been received. And she agonized over the significant expense of doing what was required to make sure her vote was counted, that her voice was heard.

So I suggested maybe it would help to put it in a broader perspective. To think about what others had sacrificed, throughout history, in order to vote. To consider what others had been willing to pay for the privilege. How the colonists had defied king and country and gone to war for the right to have a representative government. How women risked reputation and imprisonment to obtain that right. How African Americans risked their safety, their very lives, in that struggle to have a voice. So many people in our country’s history have been willing, have found it necessary, to risk everything for a privilege we now take for granted. And I told her something I truly believe: if you fail to exercise your rights, fail to live up to the responsibilities that come with those rights, you risk losing them.

She decided to pay the fifty dollars. She gets a sticker.

You might wonder why I didn’t offer to pay it for her, or at least offer to chip in. There are two reasons. First, because she didn’t ask. She didn’t come looking for a handout, she came to me for advice. I’m proud of her for that. Second, and more important, because every time she votes in the years to come, I hope she will remember the time she had to pay a price that, at the time, was a dear one. And remember why she decided it was important to do so.

My trees are trying to kill me. Their weapon of choice? Acorns.

You think I’m kidding? Look at this: 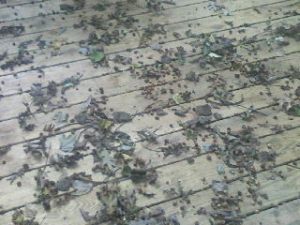 In the thirteen years I’ve lived under these trees, I have never seen so many acorns. Some people say this increased production is a sign we’ll have a harsh winter. Bah! I know the real reason. It’s in retaliation for this:

Yes, this summer I had the tree guys come and trim some branches off the trees. I even had them cut down a few scraggly specimens whose branches were scraping on the garage roof. And they removed two that were dead. They did a great job and the “canopy” looks so much better. They even cleaned up every leaf and twig of their mess. Very professional. 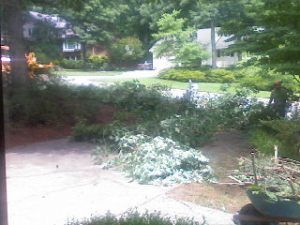 But now the trees are on the rampage, getting back at me. These acorns aren’t just falling, they’re being hurled. Thrown with force. You should hear the noise these things make when they hit the roof. And the gutters. Do you know how much it hurts when an acorn traveling at high velocity hits unprotected body parts? Walking to the end of the driveway to get the mail is courting serious injury. If the acorns don’t hit you, you risk turning an ankle when you step on them. This morning I backed out of the garage and was barraged by a series of violent explosions bouncing off the roof of the car. Acorns. Personal injury isn’t enough, now they’re going for property damage. I’m surprised I could even hear it though, since there are so many acorns covering the driveway it sounds like driving across acorn-filled bubble-wrap.

I’m convinced the squirrels are in on it. It’s a conspiracy. They’re miffed that I disrupted their travels on the super-highway from the maple tree in the back yard across the roof to the big oak in front. I had the branches trimmed so they couldn’t do that.

Hey, they’ve got plenty of trees. They don’t need to be climbing all over my house too. I can picture them up there, three and four in a group, pulling back on the leafy end of an acorn-laden branch, stretching it tight like a slingshot, waiting for just the right moment and then letting go, releasing a hail of acorns, strafing the siding and pelting the roof over my bedroom. They do this several times each night. Yes, it wakes me up. Every single time. I see them the next morning when I open the blinds, sitting on the branch outside my window. Smirking.

But I’m onto them and I have a plan. I’m going to stay inside until they run out of ammunition. I figure it shouldn’t take more than another month. Or so. Okay, I didn’t say it was a particularly good plan.

Next thing I know, they’ll be trying to smother me. With leaves.