So, we’re making progress. It comes with a price. The smell of fresh paint is giving me a headache. The constant invasion of my space by pleasantly cheerful worker-people is making me grouchy. Getting up two hours earlier than usual to accommodate their schedule is making me tired — because I can’t seem to convince myself to go to bed two hours earlier. It has become a real struggle not to nod off at my desk about mid-afternoon.

Here is the godawful wallpaper that used to be in the master bathroom. Actually, it’s still there; they painted over it.

My bathroom now looks terrific and I’m left wondering why I didn’t do this long ago. The Dog’s Favourite Person asked why I had them paint the walls white [it’s a perfectly lovely creamy off-white]. Why not something pretty, like blue? I told him it’s like inviting someone to decorate an Easter egg. You wouldn’t give them an egg that had already been decorated. You want them to imagine their own design.

Every morning I think, today is the day they’ll finish up, but every afternoon they tell me they’ll see me at the same time tomorrow. I’m starting to believe they’ll continue to show up every morning until I sell the house. Maybe even after that. Caution to new owners: This house comes with its own work crew that will arrive at the crack of dawn every morning, just in case something needs doing around the place.

And it’s never nothing. They keep finding more things they can fix. I want to say, “STOP it, that’s ENOUGH already!” — except they’re just trying to help. I’m convinced it’s a guy thing. They see a problem, they want to solve it. The most recent offer was to point up the mortar between the bricks on the front steps.

The contractor gave a shrug and looked at me with a self-confident grin, as if every man knows how to do that. “Sure I do, love. Not a problem.”

Yes, it really needed to be done. I just hadn’t noticed. See how nice they look now?

I’m notorious for not noticing things. For instance, when the real estate agent first came to look at the house, we were in the master bathroom and she said, “Can we get rid of the cup holder, or are you using it?” I said, “What cup holder?” She looked at me like I had three heads and none of them were functioning very well. 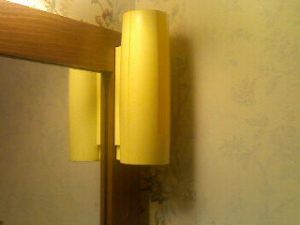 I swear, I stopped “seeing” that damn thing a week after we bought the house. Oh, I tried to take it down. But it’s stuck on there pretty good. Probably I got distracted and wandered off before I found the right tool for the job. And then, because my brain can do magic, it became invisible. Maybe I’ll ask these guys whether they can remove it. No, not my brain. The cup holder.

Really, this whole hiring people to do stuff thing is making me feel helpless and ineffective and less than capable of being a homeowner. As I said, all this progress comes with a price.